How very annoying this was.

I’m setting up an SBS 2008 server for a client and the setup process got to the “expanding and installing files” part. 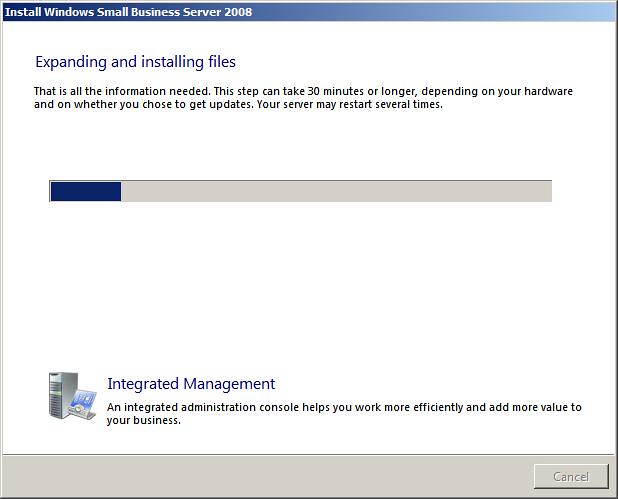 It was running in the background whilst I was doing some other bits and pieces but I noticed it had seemed to get stuck right at the end for some time.

As is always the way when waiting for software to install I thought it was just me so left it a bit longer. (Progress bars play tricks with your mind!)

Eventually I realised nothing was going on so pressed ALT+F10 to bring up a command prompt.

and found this at the bottom

Looking at the timestamps it had been at this stage for some time so I figured the downloading of the update had stalled.

I used the BITSADMIN tool to see if there were any queued up jobs but no luck. Though on reflection I forgot to use the /ALLUSERS flag so there could have been jobs queued that I didn’t see.

I disconnected the network cable and reconnected it with a faint hope it might kick off the download again but no luck.

I even restarted the DHCP Client service with a similar hope but nothing happened.

So I bit the bullet and used “net stop wuauserv” and “net start wuauserv” to restart the Windows Update Service.

The progress shot to the end, SBS setup finished and within in a couple of minutes I was at the desktop.

Since the problem seemed to be just on the download of an update and not an install I’m pretty confident I’ll be able to run Windows Updates again to pick up whatever didn’t get installed.

The main frustration was that I didn’t know there was an issue as there was no feedback to think there was anything wrong.. It was only the fact I thought it was taking too long that made me investigate. I could have very easily have left it running overnight to have come back the following morning just to find it in the same state!

This is where practise makes perfect. I’ve seen the SBS setup process run so many times I know roughly how long it should take to complete.

Anyway – the SBS logs directory is a really great source of information. I may have linked to this in the past but there is a great post on the official SBS blog about them.