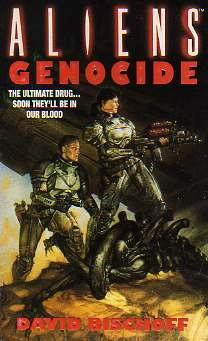 I picked this up ages ago on market stall selling old books.

Aliens is pretty standard geek fare and as a teenager I was obsessed with both Aliens and Predator. I haven’t read any Aliens fiction for ages so thought I’d change that since book has been sat on the shelf for a while.

The plot is focussed around a pharmaceutical company who make drugs from Alien “royal jelly” (gunk from the eggs). Their main product “Xeon Zip” is a little but like Red Bull but it starts to have weird effects on certain people, turning them overly aggressive and giving them superhuman strength and speed – they call this product offshoot “Fire” and naturally this gets the attention of the military and a mission is put together to visit the Alien “hiveworld” and collect some more of this royal jelly. The story follows two main characters, Daniel Grant – the owner of the pharmaceutical company who tags along on the mission to get away from his “business problems” on Earth and Colonel Alexandra Kozlowski who heads up the team of soldiers that are visit the planet.

They don’t actually get to the planet until the last third of the book which is a bit of a shame as it meant the action on the planet was actually quite short.

When they get to the planet they discover the Aliens have split into two different variations, the regular black Aliens and these new red Aliens and the ship lands right in the middle of a war between the two factions which gives them plenty more to contend with on what was already a seemingly impossible mission.

On the whole it was a good read but it would have been nice if the red/black Alien concept had been explored further.

If you’re a fan of the Aliens universe it’s worth a read.

You can get it on Amazon here.