I grabbed my ISO’s this morning and was thinking about how best to approach the upgrade on my netbook.

I then remembered that when Vista was first released there was a tool for letting you know if your system would be up to the task and thankfully there is also a Windows 7 version.

Here a grab of the final report, 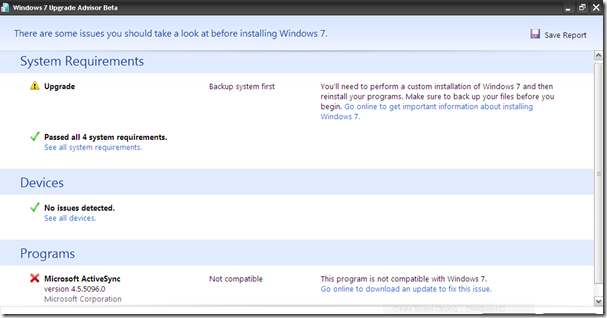 It’s suggesting I do a backup as I’ll need to do “custom install” (i.e a clean install). Since the netbook is running XP this is to be expected.

It also says that ActiveSync isn’t compatible with Windows 7. This isn’t a surprise either as it was replaced with Windows Mobile Device Manager in Vista.

At the top of the report it says that the system meets all four of the system requirements. Drilling into it you see this,

I haven’t installed any extra RAM in the netbook yet, so was pleased it didn’t kick up too much of fuss about that. I was also glad to see that it’s Aero capable!

Guess what I’ll be doing this weekend? 🙂